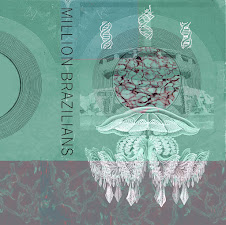 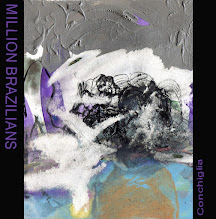 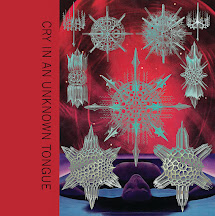 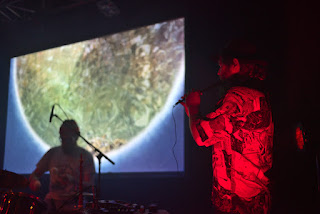 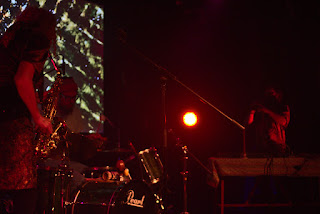 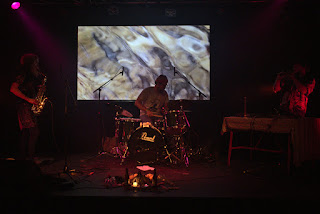 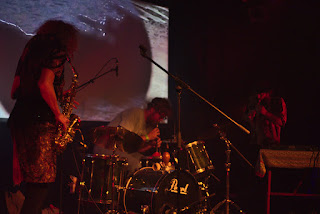 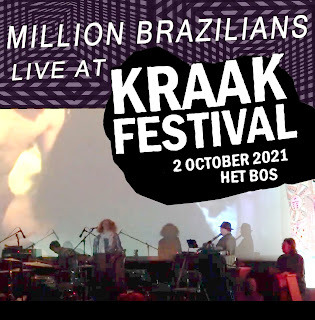 (out of print)
"Beautiful new LP (the seventh, I believe), from this wonderfully abstract outfit, who were birthed in the shadow of Smegma (Portland, OR), but have since relocated to Maine.
The foundational members of the band are Grant Corum (keyboards, vocals, tin whistle, vocals) and Suzanne Stone (alto sax, khene, vocals). For this album, recorded by Big Blood’s Caleb Mulkerin, they are joined by Caleb himself (tape loops & treatments) and Tom Kovacevic (piano & synth), both of whom played together back in Cerberus Shoals. The quartet is hot. Even when it’s a trio.
The music has a blocked-out and dreamy quality, with jazzoid touches and perhaps less of an ethnographic quality than some of the band’s work. But the music also exists in large chunks, which are moved around in a way that almost recalls (strategically, if not sonically) groups like Colorado’s Mnemonists/Biota collective. There’s a heavy and reflective quality to all the sounds generated and how they are shaped.
The album takes its title from the work of the late visionary artist, Paul Laffoley, from whom the band learned many lessons, and for whom the music stands as a sort of threnody. And the sounds here seem to inhabit some of the same psychic space as Laffoley’s work — creating panels of aural architecture with mandalic balance and flow.
Million Brazilians’ music has lots of depth and a shifting focus that makes it hard to identify as any particular brand of music. But as Duke Ellington so elegantly put it, “If it sounds good, it is good.” And Urban Fossickated Octave sounds more than good. Take it from the Duke. And then some." -Byron Coley, 2019
************************************
'Strange Oasis'
CD / Digital Download
(Nonlocal Research)

'
NORTH AMERICA -  ORDER HERE
SOUTH AMERICA - ORDER HERE
"In 1925, Colonel Percy Harrison Fawcett disappeared in the indescribable jungles of Brazil during an expedition to find the lost city of Z. The city not only represented a sort of El Dorado, but also a state of consciousness in which the traveler and the jungle became a single being. Fawcett describes this ideal moment as the appearance of an inverted oasis; a deserted space in-between lush vegetation where one cannot longer distinguish one plant from the other, water from land or bugs from birds. All of them form a unified harmonic tissue of organic matter.Strange Oasis by Million Brazilians is in sound what Fawcett dreamed to find. Loaded with layers of tribal percussion, far-out atmospheres and exotic melodies, this record achieves to gather lush and mystery in a tangible fabric of sound. Flutes pass as birds, taps as humid drops, melodies as organic currents. A ritual happening far away and within simultaneously. As the music crowds round us, the sounds take on animal and vegetal flesh to form a strange oasis in the exact middle of the inner jungle." - Nonlocal Research
***********************************************
Psychic Sounds Ensemble 'Sonic Fermentations' Batch 2 (excerpt) from Psychic Sounds on Vimeo.

(out of print)
U.S. cassette reissue coming out October 2021
"Their next installment Red Rose & Obsidian was recorded in Maine and engineered by Big Blood’s Caleb Mulkerin. Both he and the band deliver a powerful yet fragile and personal release. The mythical and evocative recordings are inspired by Maine's rugged coastlines; mournful ripples of sound wash up on the shore, whilst a lonesome, at times harrowing saxophone drifts through the rolling mountains, providing unsettling melodic interludes. Electronic treatments veil organic sounds, a fleeting whistle meets spontaneously with spacey flutes, mutated rock rhythms are topped off with the soaring vocals of Suzanne who leads the listeners into the magical world of the Million Brazilians."
- Lullabies for Insomniacs 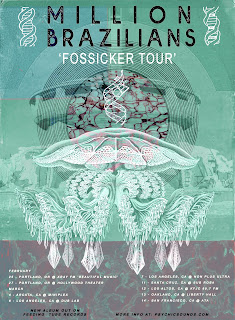 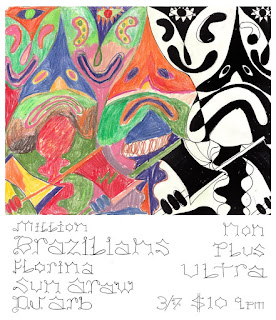